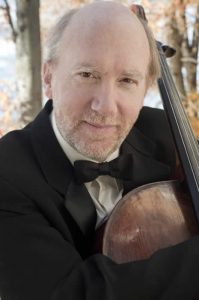 Cellist Michael Reynolds (michaelreynoldscello.com) has taught at Boston University’s College of Fine Arts since 1983. Previous appointments include New England Conservatory, Rutgers University, the University of Utah, and UC Santa Cruz. He received an honorary doctorate from Rhode Island College in 1995. He received his professional training at the Curtis Institute of Music, where he was a student of David Soyer and Martita Casals. His studies continued with Karen Tuttle and George Neikrug and at Yale University. His students continue to develop successful careers in music, including members of the Boston Symphony and other orchestras, teachers at universities, four Boston Symphony Competition and numerous other competition winners.

Mr. Reynolds has been the cellist of the renowned Muir String Quartet since its inception in 1979. Mr. Reynolds has performed nearly 2,000 concerts throughout North America, Europe and the Far East, and he has performed with such diverse artists as Leon Fleisher, Menachem Pressler, Gil Shaham, Richard Stoltzman, Phyllis Curtin and Benny Goodman.

Awards include first prize at the Evian Competition, the Naumburg Award, two Grand Prix du Disques, the Gramophone Award, a Grammy nomination and a Grammy, and an internationally acclaimed PBS broadcast, “In Performance at The White House” for President and Mrs. Ronald Reagan. Mr. Reynolds has appeared with orchestras and in recital throughout the U.S, and his recording of the Bach Suites for Solo Cello has received much critical acclaim.

He is co-founder and Executive/Artistic Director of Classics for Kids Foundation (classicsforkids.org) which offers matching grants for excellent instruments to string programs, and he directs the Emerging Quartets and Composers program in Park City, Utah, in partnership with Joan Tower and the Utah Symphony/Opera. In his spare time he is an avid flyfisherman and outdoorsman. He plays a cello by Giuseppi Grancino, circa 1700.